Potato party for one 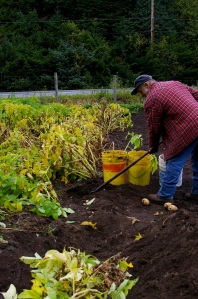 Clarence harvesting the potatoes for my party.

Recently I helped my friend Clarence harvest some of his potatoes. He is one of our stoic  ‘old-timers’, and each year plants one of the largest gardens in the valley. In fact, Clarence’s garden is quite the food security resource for our community. Many people rely on his harvest each year to stock their pantry shelves. Some of his harvest he sells, but much of it he gives away to those less able to pay.

I tend to go to his garden to harvest knowledge and take home his stories by the bucket-load. The other day, we were amidst a sea of potato tops chatting while he was harvesting potatoes for someone who would soon arrive to pick them up.  Quite abruptly, he turned on his heel and took off across the garden. Apparently he decided I needed to test out a fingerling potato that he was unimpressed by. Leaping rows in a single bound, he called back to me: “I don’t know what to make of it.”

When I caught up to him, he was already unearthing what looked to me like lovely, small, light golden tubers. “See how they are too small,” he said, holding them out in front of himself with disdain. He told me he didn’t know why they call them ‘Indian’ potatoes and highlighted the various errors in their conformation. He didn’t like the fact they were ‘knobbly’ but mostly he was unimpressed with the size; Clarence is big on ‘big’ vegetables, and each year hunts for the largest of each item in his garden. Once, while showing off his big potato at the local Coop store, it was inadvertently scanned through the check-out and Clarence ended up paying for it!

“I want you to try them and let me know what you think of them,” he said, loading a bunch of the fingerlings into a bucket. “Are you going to keep growing them?” I asked. His hand came up in front of me. Pausing as if to punctuate the moment, “Question,” was all he said–finger tracing the shape, echoing the announcement through the air.  The jury was not yet in. My assignment, according to Clarence, was to take these little ‘twisty, turny, knobbly’ things home, taste them and report back with the final verdict. The pressure was on. The future of these potatoes in the valley rested on my experience with them. He outlined the set of parameters that I was to judge them by: how were they to clean, were the eyes too deep, were they too much bother for the amount of food value–something that he suspected.

In his list of guidelines I noted there was nothing about taste, heritage, or pedigree. This is a man who obviously has a different value system than I do; he’s a utilitarian gardener. But then it’s not surprising, given the more than 40 years and several generations of experience that separate us. “Well, while I’m at it Clarence, would you mind if I took home one of each variety?” If I was going to do the experiment, I thought, I might as well make it worth my while and put them up against some other varieties.  I wanted to really ‘put them through the mill’ as it were.

This year, Clarence is growing four kinds of different spuds: Kennebec (a Canadian heirloom), Red Rose, Yukon Gold (another Canadian variety) and the fingerling potato of questionable merit. I took each of the four varieties home, washed and chopped them up and  then added my organic red of unknown pedigree to the pot. Wanting to keep the testing simple, and taste the potatoes in as undisguised form as possible–to even the playing field, I reasoned–I simply boiled them in salted water.

Once cooked, I laid them out on a plate. Surprisingly, there was a riot of color, or at least shades of color. I began sampling; they had remarkably different textures as well as flavours. Not surprisingly, I liked each of Clarence’s varieties better than my own. Even his Yukon Gold outclassed my own Yukon Gold; something to be said for soil management, among other things, I thought.

This is a potato worthy of harvesting: a Kennebec--big, shallow eyes, easy to clean.

Thoroughly enjoying my personal potato party, I couldn’t avoid the fact that the winner in terms of flavour and texture was the ‘knobbly’ little fingerling! Clarence was not going to like my final verdict. When I reported back to him the next day, not surprisingly he looked disappointed. By the look on his face, I could tell he was torn between two philosophies.  What he liked was growing big, utilitarian items (he’s an alfa-male through and through). And yet,  one can tell there is also a commitment to keeping the heritage alive. “Well, you can take as many as you like,” he offered. I was sure he was hoping I’d take them all off his hands and rid him of the burden of keeping the seed going.

I happily dug in and took a five gallon bucket-load home, probably about 25-30 pounds worth, along with the others he’d harvested for me. The next day, I returned to visit him and report on my findings. He was still unconvinced. This time, however, I was armed with knowledge, with a history, with a name. After tasting the potato and falling in love with it, I  felt a personal responsibility towards it and knew I would feel guilty if I let it down– if Clarence might stop growing it. It was as if  the future of the fingerling in the Bella Coola Valley lay in my hands. Because of this, I had done my homework. 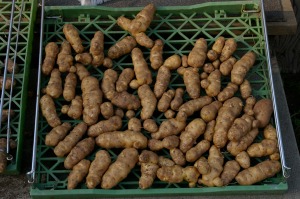 Ozette potatoes drying in the sun.

It is an ancient variety of potato. It was brought to North America by the Spanish explorers in the 1700s and given to the Makah Indians of Neah Bay on the Olympic Peninsula in Washington. It is called the Ozette. It gets its name from the area where the Makah Indians still grow it after all these years.

The fact that I raved about the texture and flavour of the Ozette did nothing for Clarence; but as I described the long and distinguished history of this little hardy potato, his face finally softened: “Well, then. I suppose I’ll have to keep some for seed.”

8 responses to “Potato party for one”