Hunting season is over 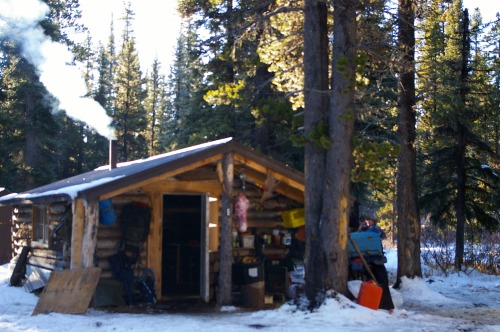 The cabin at Louie Creek on a sunny day (note the fresh moose skull hanging on the cabin pole).

Hunting season for deer and moose finally ended for us  on November 30th, and I came home without my buck. Neither Clarence nor I even fired our rifles. In fact, in the whole trip (for me this meant 7 days and Clarence was gone for 14) we didn’t even see a legal deer or moose. Nevertheless, what the trip lacked in face to face game-hunting, it well made up for in excitement and educational opportunities. I learned how to identify the tracks of all sorts of animals, and spent some time tracking moose that managed to stay just out of our sights before crossing a boundary and leaving our legal hunting area–how often they did this made me wonder if the Department of Conservation supplied the moose with free hunting synopses.

The first day out, we spent hours traveling the roads (de-activated logging routes, actually) by vehicle, looking for some fresh tracks. We covered mile after mile on the road west of our cabin, road and then the east road, but found not a single fresh moose track. Others in the family took off on foot, snowshoe or ATV. At 83, Clarence the patriarch had a pace which suited me just fine on my first time hunting. We did see fresh wolf tracks, and many other tracks such as foxes and martins. While I was excited to even see the old moose tracks and wondered why we were not striking off on their trail, Clarence patiently explained that a moose that made a track as old as the one we were looking at could by now be 50 miles or more away. Ah ha. The next few days were spent similarly. We got up in the mornings and headed out on the hunt for fresh moose tracks, returning at a civilized hour for lunch or dinner, while the other members of the family disappeared for 6-9 hours at a time, often into the early gathering dusk. Finally, we did come across some fresh tracks. “Oh, my aching back, look at those here, my dear,” Clarence said, head hanging out the window while gently bringing the truck to a stop. “Here we go,” he whispered, and then reverted to sign language. 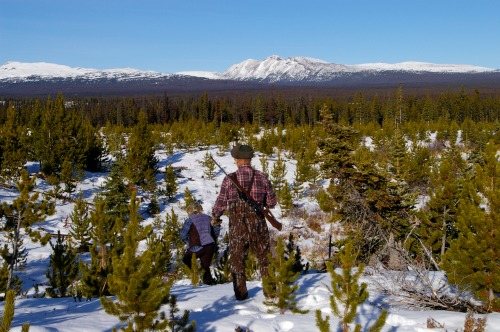 On the trail of fresh moose tracks.

Spot the two hunters in this photo!

We got out, hung our rifles over our shoulders, I took note of the compass direction, and he signaled that I was to lead the way. The moose was heading almost due north. I struck out in front of Clarence and followed the fresh moose tracks. As you can see from the above photos, we are walking through an old clear-cut. The moose like the openness of the clear-cuts, primarily because their favourite food colonizes those clear-cuts quickly. Tracking is pretty easy in this kind of snow: the snow is not so deep that the walking is difficult, it’s fresh enough not to make a noise as you walk, and it shows up the tracks well. The moose had woven its way through the young re-growth, looking for delicacies among the evergreen saplings. “Red Willow,” Clarence whispered and pointed to the chewed tips of the brush, “it’s a moose’s favourite browse.” 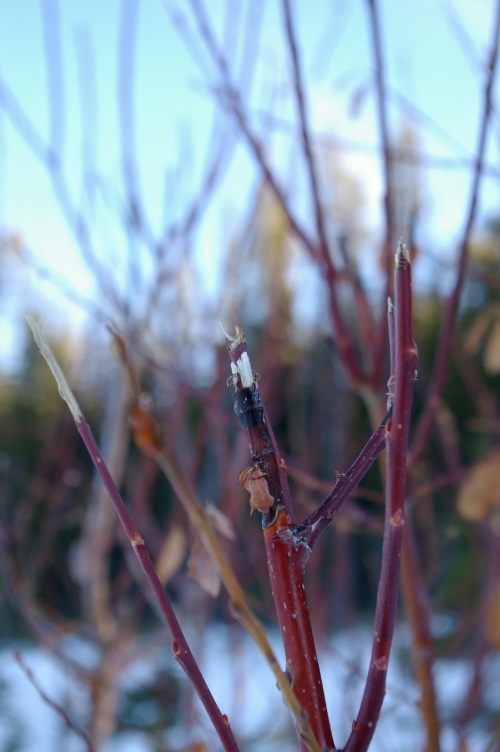 About four hundred yards across the clear-cut, I came across two more sets of moose tracks coming from the east.  They seemed to meet up here and then travel on together, all heading north. This put a spring in Clarence’s step: now we were on the trail of three adult moose. Another few minutes into the tracking and a fourth set of tracks showed up, also coming from the east, “Awe, it’s a baby moose,” whispered Clarence, “It must be traveling with its mama.” Although we now knew that at least two of the moose we were tracking were definitely not legal to hunt, there was a surprising tenderness rather than disappointment in his voice. We carried on, though, because the first two sets of tracks were definitely adult tracks.

After about half a mile, we entered into the deeper forest on the other side of the clear-cut. The tracking is not as easy at that point; the trees drop snow and cover the tracks, the sunlight doesn’t penetrate the forest easily and the tracks become obscure, and the density makes the walking much more difficult. We continued tracking the moose until Clarence finally said it was time to turn back. Why? I asked, “Because we are almost back to the highway. Those moose will have crossed it by now.” In other words, they’d made it to safety and out of the legal area for which Clarence had a hunting tag. It amazed me that Clarence seemed to know exactly where we were on and around these Little Rainbow Mountains, no matter if we were in the truck, on the trail or deep into the bush. He kept saying, “Now we’re going north… now we’re heading south south-east… now we’re going north west,” and so on. Each time he spoke, I looked at my compass: he was always dead on.

The next few days were spent very similarly. We’d head out each morning looking for fresh tracks. When we came across fresh ones we’d get out and track them for as long as it made sense: until they left the legal area, until it became too dark, and on one occasion until the weather abruptly turned sour, which happened so quickly I didn’t see it coming. One minute it was warm and sunny; next thing I knew, we were heading back across our tracks in a blizzard, donning more clothing and battening down the hatches of our ‘Elmer Fudd’-style hunting hats to keep warm.

Although we didn’t ever get close enough to see the moose actually making the tracks, we did reveal the story of how several of them spent their day. Clarence was always teaching me as we went: he had me do ‘dry runs’ where I’d pretend that a rock or tree up ahead was in fact a moose, load my rifle, take aim and pretend to fire, then unload and continue on the hunt. He also taught me and then quizzed me on every set of tracks we came across. On one occasion, while we were tracking a moose, the tracks merged with another baby moose. Despite the fact that the moose was obviously a mama and therefore not legal, we kept on hoping to catch a glimpse of them. Clarence was happy to let me lead and teach me as we went: looking at the browse they were eating, where they had bedded down for a rest, and showing me the droppings of the baby. “Oh look, it’s a baby bull,” he said, lifting a morsel between his fingers and holding it up for me to look at. “How can you tell?” I asked, trying not to show too much alarm over the fact that he had moose feces in his hands. “One end is flat,” he said and gently placed it back on the snow. “Don’t worry, I won’t hand you a cookie with that hand, OK?” 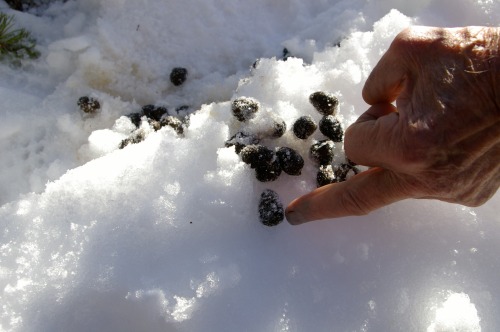 Baby bull moose poop; note it is blunt on one end.

In the end, he did eat a cookie with that hand. He also ate  his favorite snack, Cheetoes, and happily licked his fingers with each bite then turned to me and laughed. “Well, the First Nations peoples used moose droppings to thicken their stews,” I said, “So I guess it can’t be that bad for you!” I’ve noticed Clarence’s lack of concern with ‘personal food hygiene’ on numerous occasions; for example, he is happy to pick an apple off the ground in my yard, take out his pocket knife and without washing either the knife (which has a species butchering resume the likes of which some zoos never achieve) or the apple (nestled on my grass where my chickens free range), cut into it and start eating. While I’m shocked each time he does it, I’m also slightly suspicious that less worry about sterile conditions of food, coupled with a regular bag of Cheetoes, might just be the answer to his longevity!

While I didn’t get my buck, it didn’t mean the hunting party came back empty handed. One of the team got a moose, and I got the opportunity to taste some of it! However, I didn’t share the family’s enthusiasm for the liver (an issue from my childhood!). I also got a quick lesson in how to skin a moose, and an overview of the merits of this particular moose with respect to its mounting appeal. One of Clarence’s sons is not only an avid hunter but also a professional taxidermist. He kindly offered me the hind end of the moose for tanning, but kept the cape because this moose was particularly beautiful, in his professional opinion, and he told me why: the light color was appealing, the markings on either side of the face were symmetrical (which hardly ever happens), and the dimensions of the skull and overall shape of the head were extremely esthetically pleasing.

Although my freezer is still game-less, I learned much: how to identify the tracks of anything which walks through a British Columbia forest, how to identify moose and deer habitat and their feed (or ‘browse’), how to handle and fire my gun, and how to orient myself around the Little Rainbow Mountains. I feel a lot more confident about next Fall’s hunting season. 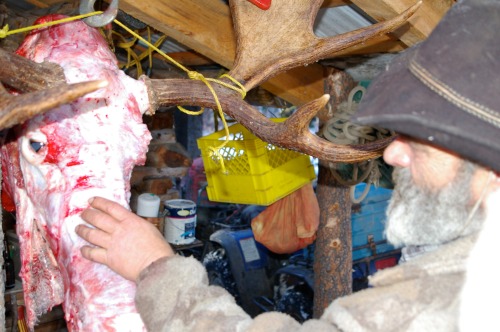 Gesturing to the skinned skull, David explains why this moose will make a beautiful mount. 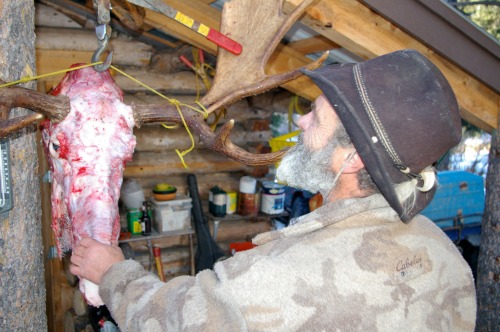 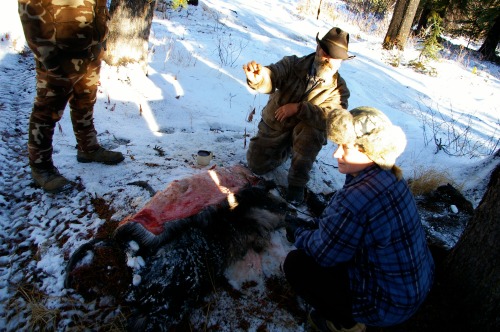 David explains to me how to keep a moose hide fresh, and pack it for shipping to a tanner.

Listening intently to David as he explains the principles of taxidermy.

4 responses to “Hunting season is over”