I’ve just been to my first cattle branding party ever and now that I’m ready to write the post I notice there is no category for me to place this post under! Cattle it is, and calves they were. A few weeks ago I had my first farm stay guest–a cowboy from Alberta. After coming all the way to Howling Duck Ranch for a much needed holiday (and to help butcher my goats!), he kindly invited me to come to a cattle branding party.

I have always loved the idea of cowboy ranching and here was an opportunity to see it live and in person. I’ve loved western movies all my life and can practically recite the dialogue from Lonesome Dove with little encouragement. Since that first trip out to the farm of my dad’s friend when I was 5 years old, I have wanted to farm and own cows. The more recent addition to the fantasy was to work them from a horse. Having  not been born into a ranching family nor even known one, I never thought I would ever get the opportunity–and now here it was being offered on my blog!

“It’s in a place called Pine Lake, Alberta,” Jeff told me when I called to ask him if the offer was serious. “We’ll be rounding them up, branding, tagging, vaccinating, and castrating… I think you’ll really enjoy it.”

I laughed. “Well, that’s some first date,” but I was secretly thrilled.

Some of the calves waiting to be branded.

For the first while I hung back, took photos, and observed all the goings on. The people were rounding the calves up and cutting them to get them into the chute. Others were keeping the fires going for the branding tools. Some were on ear tagging duty. Jeff was in charge of vaccinations and yet another fellow was doing the castrating.

“Kristeva wants to do the cutting” Jeff announced matter-of-factly while the men were delegating tasks. Much to my horror, they nearly took him seriously. Flattered, but not quite that game, I quietly declined. The look on one man’s face told me he would have loved to be relieved of the task–maybe it hurts internally to do that job when you are a man!

Lots of folks involved in the different aspects of the job. This view from the calf pen on through to the chute.

With all that was going on around me, it was a bit overwhelming to say the least. To make matters more confusing for an inexperienced greenhorn like me there were three different men’s cattle to brand, which made the job of cutting more exciting. I was determined to get in on the action and learn how to do something. When I finally felt brave enough I asked if I could learn to cut and run the calves up the chute. The man who would be my mentor looked me up and down, “I don’t know” he said, reluctance oozing out of his every pour. “Even with my 25+ years of experience one of them little buggers nearly got me in the chops just this morning.” He looked at my clean jeans and pink trimmed jean shirt and was busy summing me up, “Are you sure you want to do this?” When I nodded, and without waiting for him to formulate the wrong conclusion, clambered over the fence into the pen.

Step two: into the chute.

Jack watches over what I’m doing and gives me guidance and pointers along the way. In the above photo I’m reaching for a calf’s tail but without much confidence. Once I get him up the chute, Jack tells me that I hesitated and the little calf had considered kicking me. “When you make your decision as to which one you’re cutting, you don’t hesitate. Get right in there behind him so he can’t get you,” he said, moving in close to the calf’s behind with his legs. “You get behind with one leg and move him against the fence with the other, like so.”

“Once you have them here you maintain control by keeping their heads from turning around. You do that by putting your hand in front of their eye as it come around and direct their head back.” He told me they can sometimes climb up and over the chute fencing, which I thought would make for some lively debate. “If that happens you pull back on their tails and that straightens them right out.”

Once you have them in front of the chute, you check what sex they are and if they have horn buds. When you move them into the chute you call out their gender and whether they have horns. That way the men know which procedures each calf needs. “We’re breeding most of them to be naturally dehorned, but because some of the mothers have horns or are from horned cows, they still show up every now and then.”

The little heifer hesitates so I encourage her into the chute.

“Heifer” I call out as I encourage her into the chute. The little calf moves on in and the process begins. The fact I only say ‘heifer’ means she is tagged, branded, and vaccinated only. The little bulls don’t have it so easy. 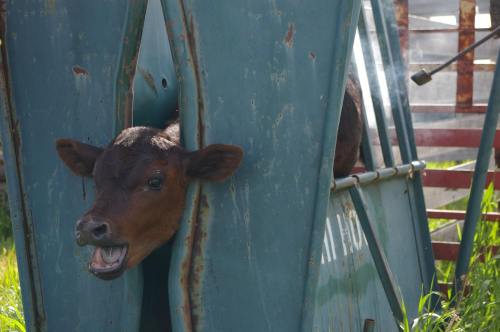 The indignity of it all is expressed in this little guy's face.

The branding irons working their magic.

Fetching the next part of the brand from the fire.

This brand is a three part brand which takes three different irons to make and Dennis’s brand is also his initials. There is a distinctive smell in the air, “Branding smoke,” Jack says as it wafts up around us in the calf pen, “I always loved the smell of branding smoke… that’s why I like to work back here.”

Castrating: Probably the least attractive aspect of today’s job is the ‘cutting’. The calf’s back leg is roped so the men doing the job don’t get kicked and can access the testicles without cutting the calf where he shouldn’t be cut. The testicles are saved in a bucket of cold water: I don’t think to ask why.

Opening the scrotum to access the testicles for removal.

Vaccinating: Amidst all the chaos, Jeff recharges the needles before administering the requisite injections.

Time to recharge the needle. Note the stainless steel bucket in the background. It contains the freshly cut testicles.

Dis-budding: The final step in the process. After everything else is complete, the calf has a basic formula placed on the areas of the skull where his horns would otherwise grow. This is a much gentler process than the traditional form of dis-budding which was akin to a large set of nail clippers that got placed over the little buds and crimped off, taking part of the skull with it. “Some calves would die of shock when we did it that way,” said one of the men, “So we prefer to do it this way if we can.” 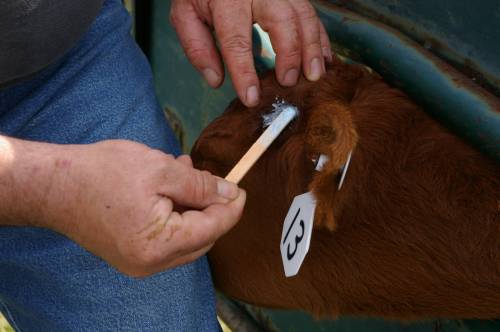 A very basic solution (as opposed to acidic) that works on dissolving the horn buds.

With so many experienced hands on deck, by late afternoon the jobs are all done and it’s time to begin preparing for the dinner party. I’ll write about that in my next post!

Filed under Cattle, Learning to Farm