Hunting lesson one: the ‘possibles’ bag 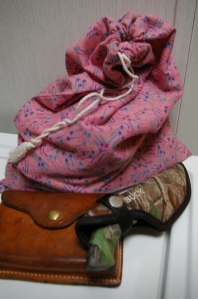 My pretty in pink possibles bag with my hand-me-down ammo pack and buck knife.

Today I went to my hunting partner’s place to catch up over coffee. He and his wife have been away with other friends and family for over a month on a hunt that took them way up north. Their trip was highly successful so when I arrived  in their kitchen today there was not a lot of time to stop for chatting and catching up; they were in full production mode dismantling several massive parts of a moose. It was all laid out on their table in large pieces ready for processing. “Is that the last of it?” I asked, wondering how much longer they would be working at this. “No. That’s just one hind quarter. The rest is still outside.” It was more meat than I’d ever seen sitting in one area. “We still have part of a goat and a sheep to process too.”

One end of the table held an electric meat grinder that was working full time and the other end of the table was the cutting, packing, wrapping station. Somewhere in the middle his grandson was cutting stewing meat and his wife was managing to take the stewing meat, place it in glass jars and pressure can it nearly as fast as they could produce it.  I could see that they were probably going to be at this for the rest of the day and night and offered to stay and help but they declined the offer. I was about to be dispatched on another errand.

Watching these people in action reminded me that the hard part in hunting is not necessarily the actual hunt. Once the animal is dead on the ground is actually when the work begins! “We stayed and helped my daughter cut up her moose but I felt badly because we only helped for one day.” He explained that it would have taken another whole day of several of them working together to finish the job but that was time they couldn’t afford to spend. “I’m supposed to be in too many places at once and I feel like I’m letting everyone down,” he confessed, letting me know he felt badly that we weren’t already out on my hunt (my hunt officially started last week but they couldn’t get back in time).

We talked about the hunt they’d just been on, got caught up on each others’ news, and I tentatively asked if they thought they would have time to do some hunting with me before my tag ran out. “Oh, we’ll be ready to go tomorrow morning.” I felt my mouth gape as I starred out at the sea of flesh before them. Then my mind whirred to little effect as I wondered if I’d be ready to go tomorrow morning. He began to make arrangements for my hunt: “Do you have your LEH?” Check. “Have you got your gun sighted in?” Check. “Do you have ammo?” Check.

So far so good. “Do you have your possibles bag ready?” No. I watched as the grinder came to a halt and production ground to a halt. Having been hunting with them before I knew what this meant but also knew I didn’t have all items that were needed. “OK. Hun,” he said turning to his wife, “Kristeva’s going to need a few things from our packs.” He began listing off the items that would become my ‘possibles’: a decent length of parachute cord, neon pink flagging tape, mag-light flashlight with the battery turned backwards, extra batteries, extra light-bulb, a Bic lighter, two Snickers bars, extra ammunition, a Gerber Exchange-A-Blade Saw with two blades (one for cutting firewood the other for cutting through moose bone), a compass, a scalpel with #22 blades, extra blades, fire starter sticks, and of course, last but not least, my LEH moose tag and hunting license. I wrote down the items that I either had already or would need to buy and his wife rummaged through their gear for the certain specialty items that they would not be caught without but that I wouldn’t be able to buy today, like parachute cord.

“You can ditch your day-pack but you never go anywhere without your possibles bag,” my friend insisted, practically glaring at me through narrowed eyelids as if I’d already committed this hunting faux pas. The possibles bag goes inside my day pack which has all sorts of other necessary goodies. The possibles bag will equipe me–theoretically at least–to be able to deal with ‘anything possible’.

The ‘possibles’ were laid out on the bench for me next to their ‘possibles ‘bags, which were all very utilitarian in color: black, brown, cammo, and dark green. Then my friend headed upstairs to find me my very own possibles bag. “I’m sorry hun, but it’s the only one I have left,” she said quite apologetically as she handed me a pretty little calico pink draw-string bag with little red and blue shooting stars all over it.

I stifled a laugh and said nothing. I was charmed by the metaphor but knew it would be lost on my utilitarian friends (they’re just not that kind of people). I smiled as I accepted my possibles bag and thought, ‘If tiny shooting stars streaking their way across cotton candy pink doesn’t conjure up images of all in life that is possible,’ I don’t know what will!