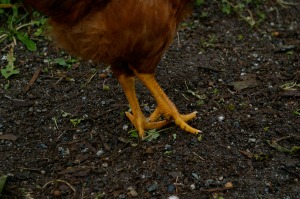 Just one example of yellow legs.

While in New Zealand, I acquired a flock of chickens that were made up from an assortment of ‘hand me down’ and otherwise general cast-offs that were all very good at living on our farm. In other words, they were good at free ranging for their own food and generally looking after themselves. All I provided them with was safe housing and water.

We were building a house on three acres and one of the contractors, Ian (who built our driveway), not only kept chickens but also ‘showed’ them. I had never heard of such a thing but was curious enough to ask about the ins and outs of showing chickens. Not only did he give us the grand tour of his chicken facility, but also he gave us a ‘chicken starter kit’, vis-à-vis some of his less than show-perfect stock. He was getting out of a certain breed, and was happy to let them go to a good home.

He had been showing chickens for years by then, but related to us a charming, self-deprecating story of his first attempts at showing. A newcomer to the exciting world of chicken showing, he began his career with Leghorns. It was the only breed he knew. He bought a breeding pair, built them suitable housing and a run, and proceeded to take great care in feeding them, talking to them and paying an inordinate amount of loving attention to them (I think his wife on occasion had been jealous of the chickens).

He began to breed some of his own. When it came time to go to his first show, Ian hand-selected two of what he thought were his most beautiful chickens; a cock and a hen, lovingly incubated and hand-raised. Both were plump, well plumed and had gorgeous, yellow legs. He took them to the show and stood there proudly displaying his stock. When the judges came by to appraise them, he was shocked when some of them snickered and generally looked down their noses at his birds; he was completely dismayed when his chickens came in dead last. He was the laughing stock of the chicken show. What he’d failed to do was check to see what the ‘show’ quality guidelines were for the Leghorn chicken: legs were to be white; what Ian thought a charming attribute was in fact a show-stopping conformational fault. When relaying this story to us he said sadly, ‘You know, some of them go so far as to bleach the legs to make them whiter before a show!’

Fast forward 7 years and we are now in Bella Coola, BC. I have acquired another bunch of hand-me-down, cast-off chickens. I don’t care. I’m not going to show them so I’m not worried about their pedigree or their adherence to breed specific guidelines. In fact, I am quite happy to see them interbreeding and am always fascinated to see how the chicks turn out.

Consequently, we end up with all sorts of shapes and sizes. I cull the roosters that don’t get along with our stud rooster Pavarotti, and also the smaller birds, because I am trying to develop hardy chickens that can handle the cold winters here, and that are good dual-purpose birds.

Because I’m not paying attention to breed conformation, it was inevitable that someone with yellow legs would appear eventually; and he did. ‘Yellow legs’ was a very striking bird. My husband–who had forgotten all about how Ian been the laughing stock of the New Zealand chicken breeders’ show–loved him (maybe this is a man thing); night after night, he would return to the house after putting them to bed and wax lyrical about his beauty: “He’s got these really beautiful yellow legs.” I reminded him of Ian’s story, but he was undeterred. Eventually, ‘Yellow Legs’ became a star of the farm. I would watch him walk, and with each step, I would say: “Yellow…legs…yellow…legs…yellow…legs”. As it got closer to slaughter time, my voice changed intonation and I pretended to be the rooster himself: ‘Yellow… legs… yellow… legs… David likes my… yellow… legs.’ Sometimes I would chant it to my husband as if this might save ‘me-now-Yellow-Legs’ from the fate of the dinner plate. 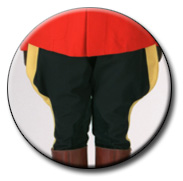 We went on like this for months as the roosters grew. Eventually, friends were exposed to the drama and also Ian’s background story, and Yellow Legs became a bit of a community legend. Once, a friend and I were on a road trip to Williams Lake when an RCMP officer walked out in front of us. Without missing a beat, she suddenly blurted out, ‘Yellow Legs, yellow legs, yellow legs’ in time with his foot-falls (the RCMP uniform has yellow stripes down the black pant legs). I burst out laughing and hoped he didn’t hear. How on earth would I explain the ridiculous effect of his RCMP uniform on me?

Some time later that year, this same friend and a host of others were over for dinner. There was good food, fine wine, great dessert and lots of laughter. There was a plate full of chicken and the people were helping themselves to it al gusto. 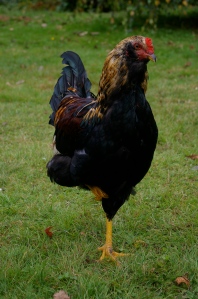 This rooster, having heard what happened to The Yellow Legs, shows some reluctance to show off his pair of yellow legs.

The friend who had been in Williams Lake with me picked up a drumstick and began to devour it, then suddenly burst out, ‘Oh my god!’ The conversation came to an abrupt stop; her hand, still holding the drumstick, had shot out of her mouth and was now poised at eye level over the centre of the table demanding all eyes’ fullest attention– ‘Is this Yellow Legs?!’

Taken aback, but not willing to lie, I admitted that, somewhere on the plate among the pile of drumsticks, were Yellow Legs’ legs. Of course I couldn’t confirm that the one she was holding was indeed the show stopping star. After a short pause of what could only be described as contemplative consideration, someone uttered a brief toast in honor of Yellow Legs. We all had a good laugh and continued eating: ‘Yellow legs, yellow legs, we all liked his yellow legs.’

Sadly, this conscious celebration of an animal’s life so that we could eat was not the reaction that a farming colleague faced when she presented to friends of hers a sumptuous dinner of roast pork, which she had raised and cooked herself. Upon hearing that the pork was not bought at the supermarket but instead was one of the pigs they had ‘met’ on a previous visit to the farm, these so-called ‘friends’ refused to eat and chose instead to take their meal at a local pub.

What did they order when they got there? Why, roast pork of course. The snubbed hostess, being much more polite than me, bit her tongue and didn’t reveal that she often supplied that pub with her own pork.

See: A pig in a poke for more on the issues related to this topic.