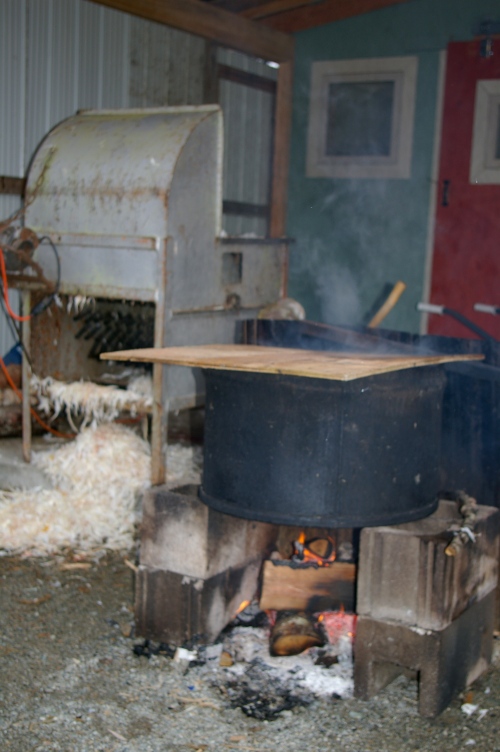 Last week I butchered 27 roosters, 8 turkeys and 2 ducks and, until a few days ago, I was doing it all by hand (see Butchering day: turkeys for complete photo documentary of the process).  Several days into the planned massacre, I had a food security meeting at the hospital (it being the only venue in the valley with video-conferencing capability). During the meeting, my mind drifted back to all the work I had to do back on the farm. While I was agonizing about how often I was having to sharpen my knife, it occurred to me that I might just be in the right place at the right time. After all, a hospital is the place where they cut people, in particular their skin, open. Why not use a scalpel?

With that thought I was suddenly anxious for the meeting to end so I could get back to the business ‘at hand’. My mind began leafing through the possibilities of who might give me a contraband scalpel; I mentally listed off the doctors whom I knew well enough to ask and noted, sadly, that all were either out of town or recently retired. While I was lamenting the loss of fruitful connections, one of the nurses walked by as if on cue. Perhaps I would be able to buy one: “Sure, but you might want to consider buying an exacto knife instead,” the nurse replied, listing off the virtues of the exacto knife: they are probably cheaper, just as sharp, not made for one time use, more convenient  and would last much longer. Laughing, he rounded out his thoughts with, “Besides, a scalpel is made for making nice neat incisions that are repairable–not really what you’re after.”

Who knew they were made for one time use? As I left the nurses’ station, I had the good fortune of running into another neighbour who at one time owned a chicken plucker. Convinced I was suffering the preliminary states of arthritis, but suppressing my desperation, I asked him nonchalantly if he still owned the contraption and whether I could borrow it. “It’s actually a turkey plucker,” he said rubbing his chin, then added mercifully, “Sure you can use it.”

Holding his hands in the air and turning them from side to side, he provided me with a quick virtual demonstration of how to use the machine, replete with the final stages of turkey plucking–holding it by the feet and gently letting it roll away from you, careful not to let it go but moving with it as it bounced up and down on the imaginary rubber prongs–and finally we made arrangements for me to pick it up the next day. (I wondered what the other patients thought we were discussing as we stood there in the corridor!) 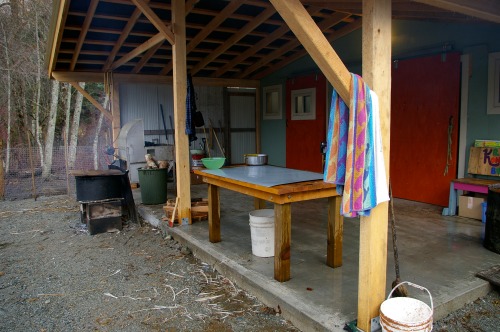 The next morning, he and my husband man-handled the great machine onto the brick patio which surrounds our fire pit, where I would be working. After they both left, I got myself organized, then got a chicken slaughtered, scalded and ready for the plucker. I plugged the machine on and it whirred satisfyingly to life. Doing my best impersonation of my instructor, I gently laid the chicken over the turning rubber prongs. With a rapid fire ‘tuk-tuk-tuk-tuk-tuk’ (reminiscent of a playing card held on the spoke of my bicycle wheel by a clothes peg), the chicken throttled to life, leaped out of my hands, whisked itself through the plucker with nary a feather lost, and flew through the damp air, pure ‘poultry in motion’, before coming to an abrupt stop on the wet grass on the far side of the machine with an unceremonious ‘thwap!’ 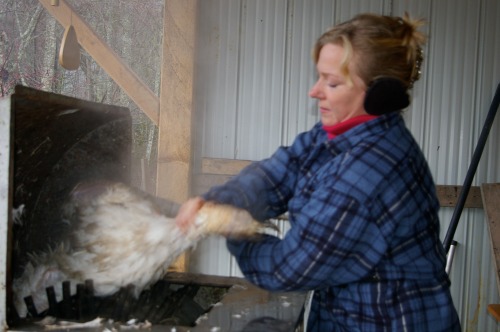 When I switched dance partners from chickens to turkeys, which are much heavier than chickens, the torque was several magnitudes greater, and once again I was caught off guard as the first turkey made one final attempt at flight. Determined to win, I hung on to his legs for dear life, bracing my gumboots against the machine in a desperate tug-of-war. When I thrust my body backwards in a final heave, the battered and torn turkey, still not exactly featherless, brought the whirling prongs to a momentary halt, and I retrieved my bird. If I’d been working alongside Kevin Costner, I would have earned the right (from the native Americans peering at me from the tree-line) to the name: ‘Dances with Turkey.’ While I lamented the loss of my first investment (battered and torn as it was), my dog Tui smiled smugly at the prospect of several gourmet meals. 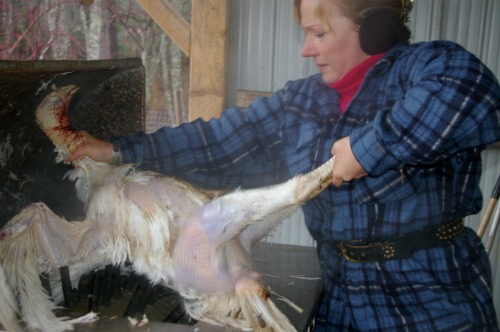 After a few false starts, I developed a feel for it. Overall, it was a fantastic addition to my repertoire and sped up my processing operation almost threefold! Here are a couple of (not so great) photos of my ‘slightly more high-tech’ but still incredibly low-tech, little operation. 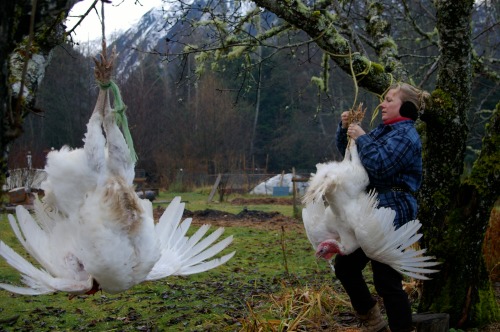 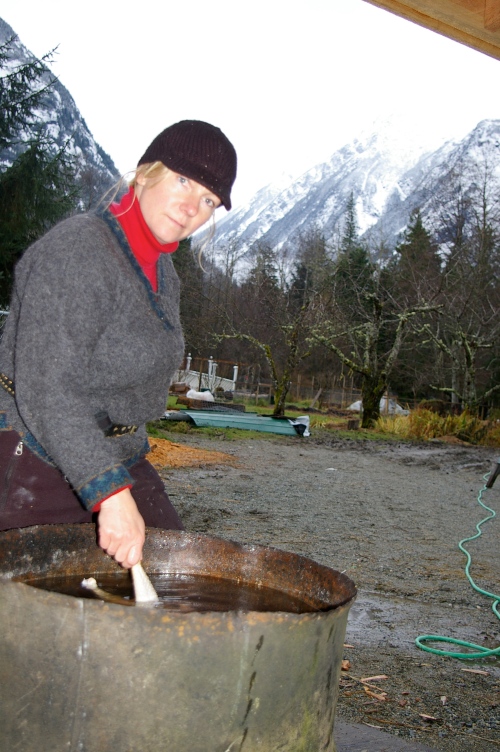 Submersing the meat in cold water to cool it down quickly after gutting. 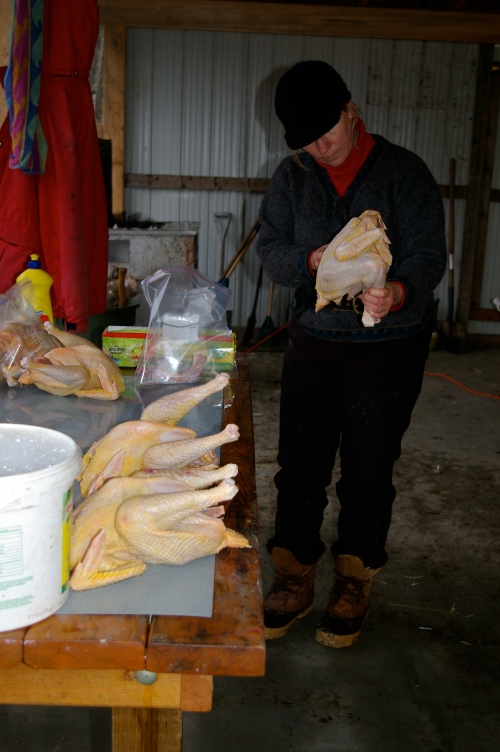 Final checking over of chickens for pin feathers and general good condition before bagging. 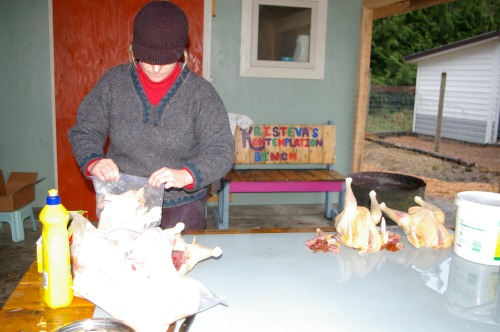 Bagging up the final product (chickens) ready for the freezer.