What I’m starting to realize is just how much a farm is like a weaving loom: it embraces the threads that become the social fabric of a community. Every time I expand the farm, I meet a variety of people in the community whom, had I not been doing this work, I would not have had reason to meet.

Men and their Machines:

Here I am with Cliff as he is delivering some rotted hay, which I use to mulch the garden. This is worth its weight in gold to me and a bad reminder of lousy haying time last year to him. I’ve lived in the community for 5 years now and had never even seen Cliff before this moment even though he lives about 200 yards away as the crow flies. In fact, I had him mixed up with someone else entirely! 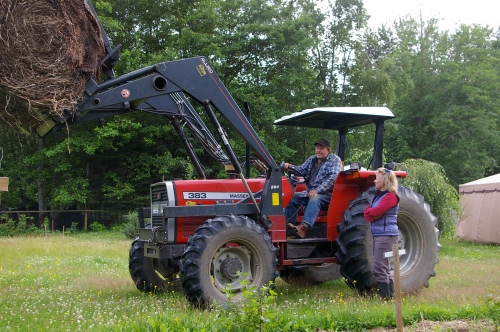 Ma'm, where would you like me to put your hay? 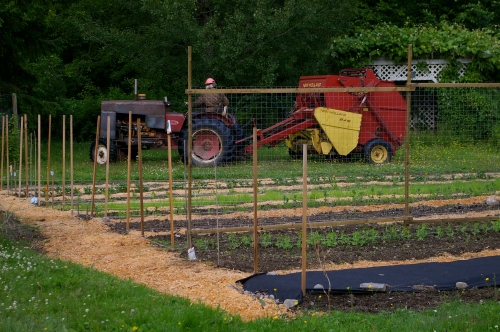 You gotta love men and their machines! Above, Ed helps Cliff deliver the rotting hay to my newest garden. In fact, Ed is responsible for the new garden. I hired him to rotovate a 2000 square foot patch in the front yard after having hired another fellow to chop down a couple of old, rotting willow trees. Ed is also a wealth of knowledge. Had I not spent some time discussing various things with him after he completed the rotovating, I would not have known how to sow my wheat! I also would not have a source of local beef, because the farmer I have previously been getting my meat from, has all his cows spoken for this year.

Below is me and Clarence (you’ll see a lot more about Clarence in other sections, the hunting  sections in particular). I have gained more knowledge and gotten more gardening secrets from Clarence than any other gardener I have met. Not only keen to share his knowledge, he’s been integral to getting parts of my garden populated. Here, for example, is a potato harvest, the seeds of which I acquired from him in the spring. Also, the beautiful purple dahlias on the left are compliments of Clarence–they were his late wife’s. In addition to the dahlias, he is responsible for my strawberry patch (with a little help from the local nursery), my black-berry patch, three cherry trees, and some gorgeous red tulips. Oh, and of course, a variety of potatoes. So Clarence’s garden continues in another location and in another form. It’s a living inheritance. 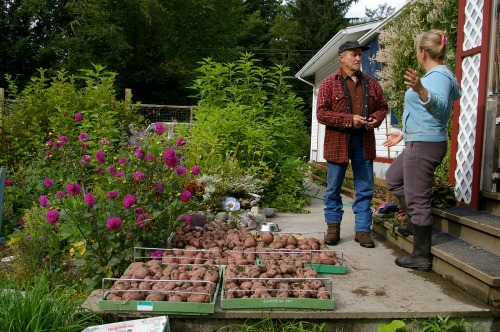 Clarence drops by to check out my harvest.

There are myriad gardeners and farmers with whom I share my trade secrets, but more importantly, they share their vast wealth of knowledge with me. For that I am eternally grateful to them. More importantly, I am thrilled to call them friends.

There is also an extensive list of people that I have hired to help build and develop parts of the farm, people who have skills and knowledge (and machines) that I do not have. The list includes loggers, builders, electricians, farmers, back-hoe operators, cement truck drivers and providers, gravel operators, and occasionally the Conservation Officers.