I do not have a background in farming or agriculture. I was raised in Vancouver and until I was in my thirties, I had only been once to a farm–when I was 5 years old. That trip was very influential, and I immediately liked the idea. When I moved to New Zealand, I was in heaven. I never did own a farm there; you don’t have to. There are plenty of opportunities to live vicariously, and so I did. I volunteered on a few farms and soaked up as much as I could.

I did eventually buy some land there and together with my husband, we built a house on three acres outside Palmerston North in the Pohangina Valley. Well, not exactly in the valley but up on a hill overlooking the valley. It was there that I got my first chickens and, later, ducks. Our neighbour, Toni-the-Greek, donated a ‘chicken starter kit’, read three hens and a rooster. The chickens did the rest of the work and happily replicated themselves.

The following year, Toni-the-Greek gave us a Muscovy duck ‘starter kit’ which was less successful than the chickens, and I learned what the term ‘like a sitting duck’ meant. Until that point, we were excited about the duck who had gone broody and was sitting on a nice batch of eggs. I don’t remember how far along into the incubation process she was, but one morning when I went out to check on her all that was left, of what had been until that point an idyllic scene, were her feet. We never did successfully hatch baby ducks there. We sold the property and the buyers wrote the chickens and ducks in to the agreement to purchase!

After this experience, I knew I never wanted to live without my own patch of dirt and flock of chickens.

I moved to Bella Coola, on the west coast of BC 5 years ago (2003), and bought a 4.1 acre property there 3 years ago. It had 2 acres of lawn which took more than three hours on a ride on mower to mow; it was, a friend said, a “two beer lawn.” I wanted to establish a food garden.

Why? I had a longstanding dream to be sovereign in my food. I wanted to either grow, raise, hunt or fish for everything I needed. I was also aware of the hypocrisy of being a meat eater: this, I thought Michael Pollan would conclude, is the omnivore’s dilemma. Agrobusiness, with its terrible food and animal treatment practices, was not for me.

My first addition was chickens. I had raised them in New Zealand and knew that there were easy: they provide a good source of protein and (a not insignificant consideration) they provide good entertainment. Thanks to a friend’s incubator, we soon had 22.

Suddenly we needed fencing. I returned from the store with fencing materials and a goat. Soon we had 5 goats. Ducks were donated for our pond, and suddenly we had a farm. Animal accommodations were the next job, followed by fruit trees: apricot, pear, quince, plum, 2 apples, crabapple, peach, 5 cherry trees, 2 gooseberries, blackcurrants, redcurrants, more blueberries, a strawberry patch, huckleberry, saskatoonberry, 4 kiwi fruit.

Having moved in in April, it was all go. With our roto-tiller we turned lawn into garden, around 2000 square feet. We fenced it 6 feet high with old fishing net to leep deer out, and divided it into 3 sections so that the chickens could turn over one area while I planted another. Our property had some well established fruit trees, including 2 cherries, 2 kinds of pears and 2 kinds of apples. A peach tree died in the 2007 winter. It also had 2 high bush cranberries, 3 blueberries, a red grape and a green grape.

More converting of lawn into vege garden, including a potato patch. We threw in horse manure form down the road, household compost, leaves, hay, and cardboard on top. We enjoyed our own harvest, especially of cauliflower, cabbage (the biggest and best tasting I’d ever experienced), broccoli, zucchini, and blueberries. We made a new berry patch, laid down sawdust paths and made our vege beds permanent: we now had about 3500 square feet under cultivation.

We got 6 broad-breasted turkey chicks from Rochester Hatchery and thoroughly enjoyed raising them; they were polite and curious, and tasted great at Thanksgiving. (My husband brought one out to me via Westjet!) We didn’t have the time to winter them over (the valley requires snow shoveling the paths almost daily), and the ducks were moved into the turkey house.

In the fall of that year, frustrated at being laid off and wageless, I moved to Regina to a part time job and the prospect of up-skilling. On March 24 I woke up, looked at my closet for what to wear and thought: “I don’t want to do this any more. My sister enjoys dressing up; I want to be in my gumboots and overalls in my garden. If I continue with my PhD I’ll end up with a good career where I have to dress properly every day!” I was 2 provinces from everything I loved: my garden, my husband, my animals. My life was there. At last I was ready to accept my husband’s offer to support me through his teaching job; this was my chance to indulge myself in the farm. I would attempt food sovereignty—and maybe write a book about it, too. I was apprehensive about this decision, because I didn’t grow up on a family farm and had always thought that this accident of heredity precluded me from being a farmer. But if I could get a PhD, surely that same diligence would help me become a farmer, especially with the resources available to me through neighbour farmers in the valley and the now voluminous resources of the Internet.

This year, we built a new turkey barn, complete with a nursery room to raise hatchlings. On the left hand side will be the home to the 99 chickens as I get the ‘herd’ built up to that number. On the right hand side at the back is the brooder room where I am presently raising 25 turkeys. It is all lined, insulated and cosy warm for the babies and full grown animals. 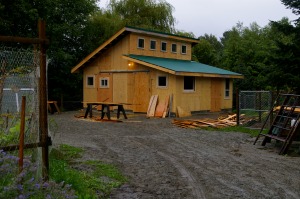 Yet to be painted, here is the turkey/chicken brooder barn.

We also built a greenhouse. I’m hopeful we’ll actually get some tomatoes and basil this year! We just don’t have the heat units for the tomatoes to be successfully raised outside, and it is simply too wet in general for basil. Of course, a greenhouse will also extend our growing season for greens during the fall.

I have never managed to be completely self-sufficient in chicken or turkey. In light of the project (and developing way of life), I plan to raise more chickens and turkeys this year than in previous years. I have ordered 50 new day old chickens of two different breeds, and have 25 day old turkeys in the new brooder barn. I plan to get rid of the ducks as they are unreliable layers of eggs, not very good mothers, and too cute to kill. Not that the other creatures aren’t also cute, but the ducks take the cake in that department.

The goats will remain lawn ornaments this year. There simply isn’t time for me to contemplate breeding them for milk or meat.

Eventually, I would like to move in to bee husbandry as well. Alas, it will have to wait.

10 responses to “Becoming a farmer”