Warning: If you are not seriously interested in learning about turkey butchering, seeing the process documented in photos, then I suggest you do not read or look any further.

I have, up until today, learned most of what I know about farming, animal husbandry, animal veterinary care, and butchering from a book. When you have been raised in the city, don’t have a farming background nor access to someone knowledgeable to teach you, this becomes the only way to learn.

My friend Clarence was butchering his turkeys today, and upon hearing his technique, my ears perked up and I asked him if I could help. Not only was it a chance for me to learn by doing, but also it was a chance for me to get behind the camera and document the process!

We had discussed the various ways of killing a turkey and when he asked me how I did it, I told him we cut the heads off. ‘That’s how we did it on the farm’ he told me. ‘I don’t do it that way anymore’. A long time ago, an old Jewish Rabbi taught Clarence how to butcher turkeys the kosher way. Since learning from the Rabbi, Clarence has never looked back. ‘You sever the jugular’ he said, gesturing to his neck  with a slicing motion, then telling me how this technique keeps the bird from flapping around, risking hurting itself and/or you in the merry dance. ‘They only flap a bit at the very end of their life this way’ he told me.

Until today, I had only read about this technique. This not only sounded like a much better way than I had been doing, but also it was the way that Joel Salatin described dispatching chickens and turkeys in his books. According to Salatin, it is the most humane and effective way to do it; the animals fall unconscious and die, but their heart works until the end to pump all the blood from the body and veins. Thus, the animal is clean for the rest of the proces; the part that makes it kosher I imagine.

I have been thinking about attempting the process of Salatin’s description since reading about it. However, I have previously had terrible experiences with attempting to slaughter animals by following a book’s description and had tried all sorts of ways to kill chickens. I found that there is technique involved in each form that simply does not get translated well, or I didn’t understand clearly. Finally, after putting several chickens through misery in my attempts to dispatch them ‘ethically’ and ‘bloodlessly’, I decided I would simply cut the heads off, and keep the suffering to a minimum. At least that way, I reasoned, they are dispatched quickly. It might not be very artful, but it was effective.

However, here was an opportunity to learn first-hand a better way under the guidance of someone well versed in the art; so I leaped at it.

NOTE: this documentary and step by step will work for turkeys, chickens, and ducks (and their wild equivalents).

Step one: catch the bird by the legs and tie it up from its feet, high enough over the ground so its head is up off of it by about 6 inches (see fifth photo below). When catching the bird, grab it by one leg, then the other, being careful not to get hurt by the wings. Most turkeys are pretty benign once you get a hold of them by the feet, but you should be cautious during the process of catching them because their wings are powerful and the claws on their their feet are sharp.

Locating the jugular vein on either side of wind-pipe.

Holding the head, cut the jugular veins on either side of the neck.

Step two: grab the bird by the head and sever the jugular vein, do this on both sides of the neck. The jugular is on either side of the wind pipe which runs along the centre of the neck, below the beak. Be sure to cut deep enough to have the blood flowing fast, not a slow drip. You will know that you have cut the jugular when the blood-flow is strong. It may even spurt a little. Once the jugular is severed on both sides, step away from the bird, out of the reach of the wings. During the bird’s  ‘last gasp’ they will flap their wings several times and you don’t want to be in the way. You could be hurt, or they could break a wing.

Cutting into the jugular vein.

A good steady flow of blood lets you know you have cut into the jugular vein correctly.

Hung by his feet, cut and bled, this Tom is in the 'throws' of death.

Step three: place the bird in hot, nearly boiling water for about 10-15 seconds. Be certain the bird is dead. He will have his eyes closed and there will be no more movement from him. Carefully take him out of the half-hitch knot and place him in 180 F degree water, not boiling; you don’t want to scaled the skin or meat. Be sure to completely dunk his body for 15 or so seconds (Clarence says 10, but he counts slow!).

Dunking the Tom in hot water to make the feather plucking easier.

Step four: remove the feathers and the pin-feathers (re-dunk the bird if the feathers do not come off easily).

Step five: Remove the head and neck. To do this, you want to cut the skin around the neck and pull the beard back over the head. Then, find the aorta and windpipe, get your fingers under them. Then, cut into the chest wall, careful not to rupture the stomach and spill the content. Cut through the layers of skin, and then rip the fat with your hands, pulling it gently away from the stomach which will be located behind a wall of fat. Once you have located the stomach, pull gently on it and get it out of the chest cavity. Then hold  the aorta and wind-pipe and and cut them off as deep into the chest as you can get. Then, peel it all back over the head, turn the head gently to find the joint where it attaches to the neck and cut between the head and neck joint. This will sever the head without having to cut through bone.

Cut skin all the way around the neck, below the beard in case of a Tom.

Locating the wind-pipe and aorta.

Gently pull stomach away from chest wall and out towards head. 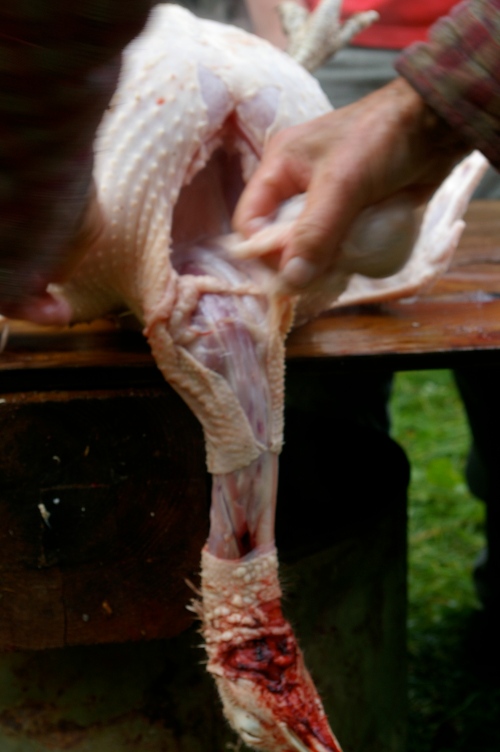 Stomach being pulled out of chest cavity.

Sever head (and stomach, wind-pipe, aorta) from the neck at the joint where the head meets the neck.

Wind-pipe, aorta, stomach and neck off the bird. 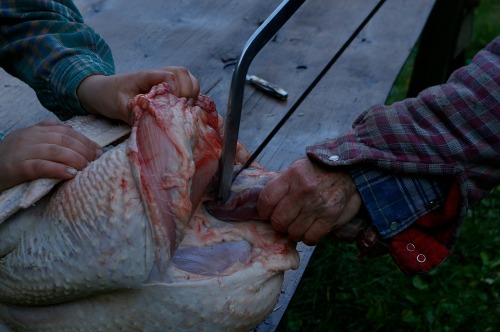 Cutting off the neck.

Step six: Remove the lower legs. To do this, cut between the joint and sever the cartilage. This way, you don’t cut through any bone and the leg comes away easily.

Cut between the joint, through the cartiledge and sever the lower leg.

Within minutes of his death, the Tom begins to look a lot like Thanksgiving dinner.

Step seven: remove the oil sac. At the base of the bird, just above the tail is the oil sac. It is under the skin. Cut the skin, and gently pull away the skin and the oil sac as you go. 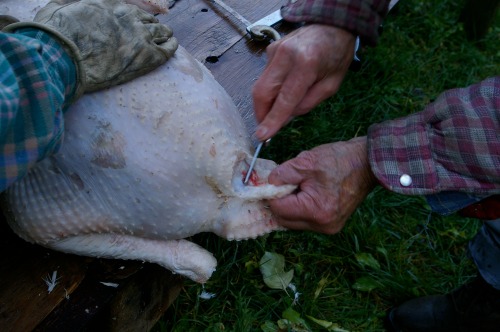 At the base of the tail is the oil sac, remove this first.

Step eight: remove the anus, being careful not to cut through the colon. To do this, cut the skin on either side of and around the anus. At this point, Clarence tells me that it comes in handy not having his left thumb and index finger tip, ‘I can use it to remove the stomach contents and not worry about my nails rupturing the contents!’ Incidentally, he did not lose them to the butchering process, but to a dynamite mishap as a young child. 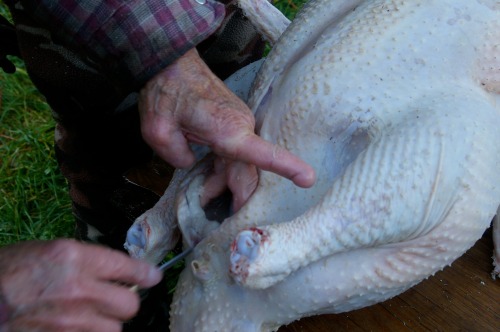 Cutting around the anus, careful not to sever the colon and spill its contents. 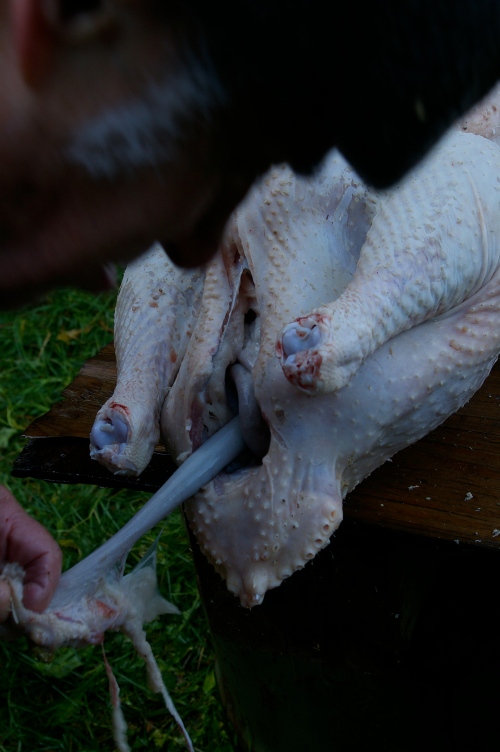 Step nine: Remove the innards. To do this, reach into the cavity with your hand. Roll your hand to one side, detaching the innards from the chest wall. Repeat towards the other direction. You should then be able to feel the heart and lungs. Take hold of these and gently pull your hand out from the belly cavity, pulling the contents with you.

Carefully removing the innards from the turkey.

Step ten: Once the innards have been removed, carefully cut out the heart, liver, and gizzard. Slice the heart in half (butterfly) and rinse of blood. Cut the liver away from the gall, careful not to spill the gall bladder contents, rinse. Cut the gizzard away and then carefully butterfly the meat, being sure not to cut into the  crop and spill the contents, rinse. Put these items to one side with the neck. These pieces are kept for cooking and are cut up small and used to make the stuffing. 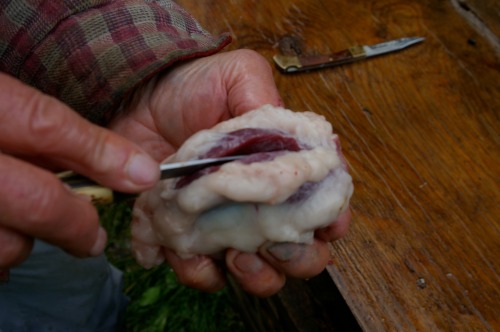 Behind the meat is the gizzard, a small pouch-like stomach full of grinding stones and undigested feed.

Carefully cut the liver away from the gall bladder, then rinse it clean. 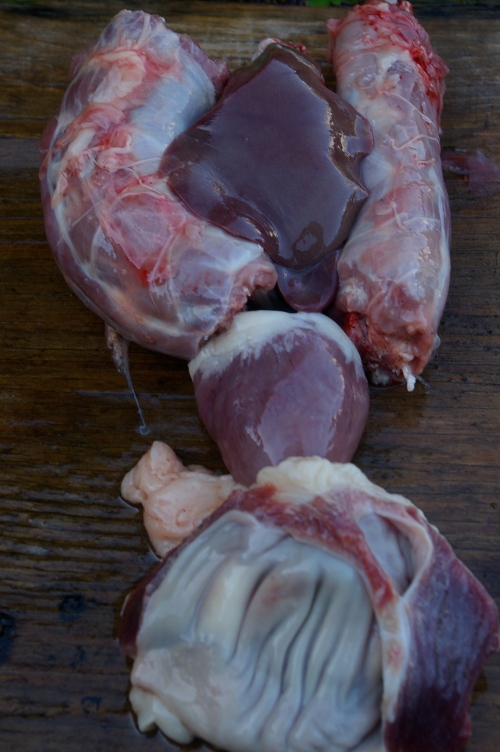 Neck in two pieces, liver between neck, then heart, and gizzard.

Step ten: cool the bird. Place the bird in cool water to chill the meat completely and give it a final rinsing. 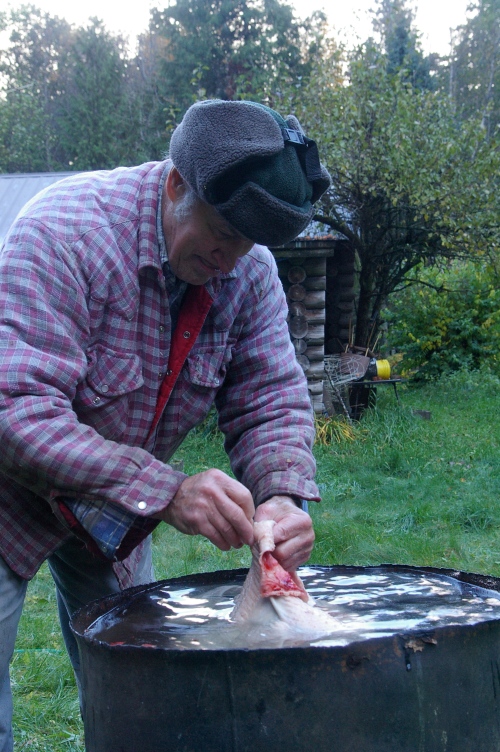 The final dunk, cooling the meat.

Finally, you have your turkey ready for the table or the freezer! 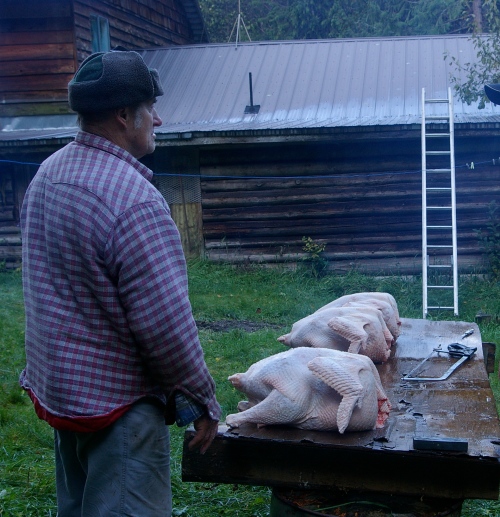